Orphan Jack Templar has no memory of his parents and only the smallest details from his Aunt Sophie about how they died. The day before Jack's fourteenth birthday, things start to change for him. At first it's great: A sudden new strength helps him defend his nose-picking friend "T-Rex" from the school bully, and even his crush, Cindy Adams, takes notice. But then a mysterious girl named Eva arrives and tells him two facts that will change his life forever. First, that he's the descendent of a long line of monster hunters and he's destined to be in the family business. Second, that there's a truce between man and monster that children are off-limits...until their fourteenth birthday! Jack has only one day before hundreds of monsters will descend on his little town of Sunnyvale and try to kill him.

As if that weren't enough, things get even more complicated when Jack discovers that the Lord of the Creach (as the monsters are collectively known) holds a personal grudge against him and will do anything to see that Jack has a slow and painful death. To stay alive and save his friends, Jack will have to battle werewolves, vampires, harpies, trolls, zombies and more. But perhaps the most dangerous thing he must face is the truth about his past. Why do the other hunters call him the last Templar? Why do they whisper that he may be the "One?" Why do the monsters want him dead so badly? Even as these questions plague him, he quickly discovers survival is his new full-time job and that in the world of monster hunters, nothing is really what it seems. 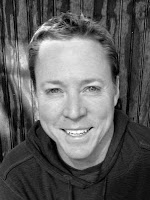 
Jeff Gunhus grew up in Cyprus, Greece, and Saudi Arabia where there was a distinct lack of television. He quickly found books were the gateway to incredible adventures, fascinating characters and unbelievable discoveries. Now, with five children of his own (all who watch too much television, in his opinion), he has enjoyed revisiting his old books and reliving those adventures all over again. 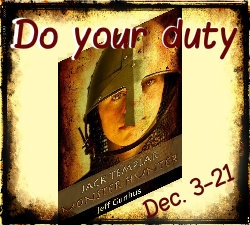 Hi Everyone. Jack Templar here. This blog tour has been great so far. I’d like to thank everyone who has posted comments, especially those who have reported monsters in their area. I think you know from all my warnings that this is dangerous work. While reading the book will attract the attention of monsters, actively working to help us track down the Creach hoard will definitely put you on the monster hunting list.
So, thanks!

I’ve received a lot of questions about how best to react to a monster attack. I thought I’d share a few key points I’ve learned in my short monster hunter career.

I hope that helps. Even at the monster hunter academy, the first lesson we learn is that there’s no foolproof way to defeat all monsters. The life expectancy of a hunter is short. It’s rare to meet a hunter older than thirty. All you can do is try your best, be cautious, and fight the good fight.

Do your duty, come what may.

Monsters, weapons, and a family mystery, what more do you need for a great adventure.  Jack Templar is a normal 13-year-old boy, until the day he finds out that a bunch of monsters are waiting for his 14th birthday to kill him.  With the help of friends, Jack manages to avoid death, but is left with many questions. But will he have time to find the answers when he is constantly trying to avoid death?  This book would be great for reluctant readers.  The plot moves along briskly with just enough detail to move the story along.  With lots of action and adventure with more sure to come, I recommend this book and look forward to future installments. 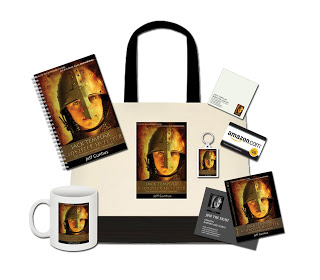 In addition to the individual swag packs offered at the various blogs, there will be 1 grand prize winner. Enter below for a chance to win. 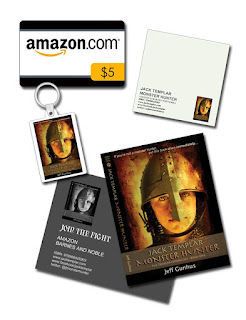 Open to anyone who can legally enter. Winning Entry will be verified prior to prize being awarded. No purchase necessary. You must be 13 or older to enter or have your parent's permission. The winner will be chosen by rafflecopter and announced here as well as emailed and will have 48 hours to respond or a new winner will be chosen. This giveaway is in no way associated with Facebook, Twitter, Rafflecopter or any other entity unless otherwise specified. The number of eligible entries received determines the odds of winning. VOID WHERE PROHIBITED BY LAW.