THE MOSSWOODS
by Astrid Yrigollen

Poppy Mosswood like most 17 year olds wants to lead a normal life. But the Mosswood family is anything but normal. Keepers protect the land from humans who would exploit it. For in the forest dwell wondrous creatures and dangerous beings. Beings that would love nothing more but to overthrow all of mankind.

Ruthless billionaire Preston Buckthorn moves to town planning to marry Poppy to his son Brad. Brad wastes no time trying to win her heart but his love is warped by the taint that runs in his blood.

As Poppy is taken in by Brad's charms the appearance of a handsome stranger from the forest awakens her heart even though it is forbidden by both their worlds. From his long dark green hair to his piercing eyes, Ashtel is beautiful and powerful. He feels the danger that has emerged to threaten both of their worlds.Torn between pledging herself as a Keeper, Brad and Ashtel, Poppy is unaware of the true identity of Preston Buckthorn and that his sinister plan includes much more than just owning Mosswood forest. 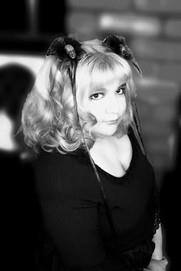 Astrid started her writing career when she begun work for the international video game giant, Sega of America. Working her way up the ranks, she began writing companion guides for games. With a love for writing fiction since childhood, she took her short stories out of storage and had her first story ever written published. It was only after that she found out that first stories are never published!  She has resumed writing full time and has succeeded in putting out the titles, The Doughnut Tree, Mysterious Pootkins , and The Mosswoods to name a few. Her short stories have appeared in the literary Threshold Press and Shock and Awe Magazine. She finds writing for young adults both refreshing and challenging. She always wishes to provide examples of positive role models, conflict resolving methods and communication for young adults with their parents or guardians.

Her newest book release is The Zombie Playground: A Creature Compilation is a collection short stories geared towards young adults. In no way gory, but more realistic then her other works, Astrid
attempts to magnify the human quality that we give some of our monsters and to let us remember that not
all monsters are bad.

Upcoming releases this year include two book length young adult titles His Black Wings and the sequel
to The Mosswoods, The Uprising due out in December 2012.


The sound of a thousand birds being disturbed in their nests made her look up even though she could see nothing but darkness. The air was suddenly filled with danger and she heard the low thump of something of incredible size heading in her direction. Before she had  decided in which direction to run, Poppy felt two strong hands reach under her armpits and bring her to her feet.
“Hurry! Your Grandfather is waiting for you.” The voice whispered once again urgently directly against her ear. She could feel lips brush her earlobe and it burned. The presence was male and strong and smelled of the forest.
“Follow the lights. They will guide you.”In an instant Poppy felt the presence was gone and felt an unexplained loneliness. She stood somewhat unsteadily on her feet. A cold wind swept through the forest to whip up leaves and debris. Poppy slowly became aware of small floating lights the size of a peanuts drifting slowly around her. What ever they were they seemed to give off a frosted glow. They began to bump against her face and arms urgently as they illuminated the area.
She looked around quickly in the new light the fire flies cast but did not see the owner of the mysterious voice . The dots of light began to bump against her more franticly now. She felt the ground shake and remembered she needed to run, to getaway and follow the lights as the voice had said. The earth trembled so hard at each pounding it was as if something of enormous size was taking a brisk walk. She knew that it would catch up to her even if she ran now. She saw something moving, a dark shape moving amongst the tallest trees. Poppy began to run following the lights. The trees were not as densely spaced now. What was so large it made the ground shake with its weight? Poppy thought, scared. She knew instinctively that it was too late to hide but she wanted to. High up in the trees she saw a huge dark object, long yet fat, the size of an automobile.
Poppy stopped running. She realized that it was attached to a massive misshaped head. Poppy knew it was not some weird flying car high up in the trees but a snout. A huge brown and shaggy snout that was part dog muzzle part pig snout. The pink flesh of the nostrils quivered delicately sniffing her out knowing she was there. Knowing exactly where she stood. She saw the wet mucous dripping down past huge teeth that grinned evilly. The mucous splattered to the ground leaving huge puddles on the forest floor. Fear kept her frozen as the thing came closer and finally, with an unearthly groan, the thing announced its presence. Illuminated by the soft white dots of light, Poppy looked into the face of the Boarman and screamed.
2012 Blog Tours Book Spotlight YA Novel Reader Book Tours Young Adult Fantasy