Welcome to the Return to Exile Blog Tour!

Keep reading for my review of the first book in the Hunters Chronicles series, plus a giveaway of a signed copy of the book and bookmark.  Also check out the book trailor below and the calender to check out the other blog tour websites for other reviews, interviews, and giveaways. 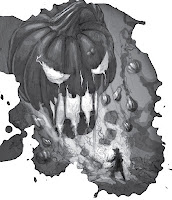 REVIEW:
Sky doesn't belong anywhere, not at home and not at school, and he has no idea why.  Long nights wandering spent looking for something he cannot name have left his parents sensitive to the slightest abnormal behavior.  Sky can't explain his behavior except for the 'little monster' he has in his head and the marks on his hands.  But when his family returns to Exile without his Uncle Phineas and the black mark on his hand bleeds black blood, Sky knows something is very wrong, and he starts to realize that what he always assumed were made-up stories about monsters may very well be real.  With the reluctant help of some teenage monster hunters, Sky sets out to find his Uncle Phineas and the answers he has been searching for his whole life, which may in the end, cost him his life. 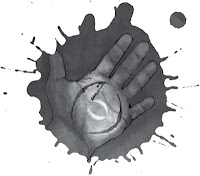 Boy, once this story started moving, it moving rapidly. There is plenty of excitement and the underlying mystery of Sky's identity and what happened to him that makes so many people want him dead pervades the book from page one.  The only real problem I had was with some of the explanations of how the world worked, I found them somewhat confusing.  But this did not detract from the exciting events or the development of the characters. Sky is a really sympathetic character as he struggles to control his 'little monster' and then his struggles once he discovers some answers.  This aspect of the story I found unique in that it adds some uncertainty about Sky and his past and his future.  This will clearly be explored throughout the series.

I have to say that I'm not really a monster person.  And this book has many monsters in it, despite that fact I found the book compelling and the different monsters intriguing.  I also appreciated the fact that the monsters were not all evil as they are often portrayed.  Some of these monsters, as Sky learns, aren't all bad, and even play an important role in Sky's search.  I recommend the book for those who appreciate longer more detailed fantasies with great characters and an intricate plot that twists and turns.  The numerous traps and puzzles make for a nice touch. I definitely will be reading the sequel.

Note: The sequel The Legend Thief comes out in December.