Fantastic Friday: The Fires Beneath the Sea by Lydia Millet 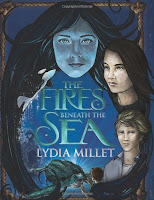 
BLURB:  Cara's mother has disappeared. Her father isn't talking about it. Her big brother Max is hiding behind his iPod, and her genius little brother Jackson is busy studying the creatures he collects from the beach. But when a watery specter begins to haunt the family's Cape Cod home, Cara and her brothers realize that their scientist mother may not be who they thought she was—and that the world has much stranger, much older inhabitants than they had imagined. With help from Cara's best friend Hayley, the three embark on a quest that will lead them from the Cape's hidden, ancient places to a shipwreck at the bottom of the sea. They're soon on the front lines of an ancient battle between good and evil, with the terrifying "pouring man" close on their heels.

There were several things I liked about this book.  First, there is a cool villain--the pouring man who is always dripping and attacks through any kind of water. Second, the author's detail about the setting (Cape Cod) created a great picture in my mind, which is useful for someone who has never been there.  Third, the use of animals in a location they aren't normally found in, this helps create tension.

Character-wise, I liked the characters okay but I didn't love them by any means.  I prefer books with characters I can really care about.  The father is the character I found most sympathetic, trying hard to carry on as if things are normal, while missing his wife desperately.  I didn't find Cara, Jax, and Max particularly compelling, interesting, but not compelling.

As far as the plot goes, the first half of the book is rather slow, after that it picks up.  Once the kids know what they are supposed to do the story moves along a nice clip, much more compelling.  The author does a good job of setting the scene, but she takes too long doing it. The most compelling scenes are the ones with the pouring man.

Overall, I liked the book well enough to read the upcoming sequels, but it's not one I'm likely to reread.  The book would make a good read for students who like lots of background and scene-setting detail.