November 14, 2011
There are some events that are forever etched in a person's memory.  Some of these events are individual, some of them involve a community.  And some events reside permanently in a country's memory.  These events may be tragedies like September 11th or triumphs like landing on the moon or bringing Apollo 13 home safely.  One such event occurred on March 25, 1911. A building fire. Now fires occur every day, what makes this one unique is the number of lives lost, needlessly lost one might say.  The 146 people (123 of them were girls) who died that day needn't have died if some simple precautions had been taken.  At the time however, laborers had few rights and in fact were treated in many cases like dirt.  The following books take a look at this event and the circumstances that preceded it and what happened afterward.  The first two books I highlight below are nonfiction, the final two are fiction.

Garment workers in the early part of the twentieth century had few rights.  They were paid poorly and treated poorly.  Forced to work twelve or more hours a day for barely a few dollars a week, they were regularly fined for mistakes both real and imagined.  Most of these workers worked in poorly lighted, accident prone environments.  These conditions resulted in workers facing disease, disability, or in some cases, death.  Many workers finally had enough and decided to stand together and form a union.  Leaders from organizations such as the American Federation of Labor, the Women's Trade Union League, as well as various woman's suffrage organizations got involved.  A general strike was called for and thousands of workers walked off the job. After months of negotiations, arrests, beatings, and meetings the strikers received promises of better working conditions, wages, and hours.  Unfortunately, many of the bigger factories soon went back on their word.  Some strikers did not even get their jobs back.  While things improved for some workers, the changes were small.

The Triangle Fire changed the labor movement forever.  The fire is thought to have started in a basket of fabric castoffs, caused by a careless smoker.  Regardless, the conditions on the top three floors of the Asch building where the Triangle factory was located were such that the fire spread rapidly.  Most workers on the eighth floor were able to escape down stairs and the still working elevators.  Most on the tenth floor also escaped by climbing to the roof and across to the neighboring building.  Many on the ninth floor, however, were trapped.  The heat from the fire disabled the elevators.  The fire escape collapsed. And one of the only two sets of stairs were inaccessable because of a locked door.  Some workers were burned to death, others desperate to escape the fire, chose to jump out the windows.  The firefighters were unable to assist, their ladders were too short and the height of the building too much.  All who jumped died on impact. This all occurred in only a half an hour.

The families of those who died received no real compensation and the owners of the factory were not found guilty of neglect.  The horror of the event did lead to governmental investigations into factory conditions and new laws being passed requiring fire drills and other safety practices to be implemented.

We Stand as One: The International Ladies Garment Workers Strike, New York, 1909
written by Laura B. Edge

This book covers the beginning of the large strike and the dangers that led to the strike in the first place. The fire is touched on in the last chapter, detailing the facts and the results.  The writing is superb and well organized.  The great writing creates a vivid and tension-filled account of an important time in U.S. history. The photographs really add to the presentation.  There are quotes from individuals involved in the strike.  Generally the quotes and experiences shared come from the better educated and wealthy individuals who got involved, which makes sense since they were better educated and more likely to be interviewed in the newspapers.  A great resource on the power of unity and women and an important time in U.S. history that still resonates today. 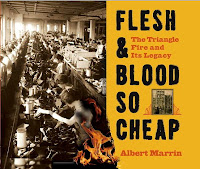 In this National Book Award Finalist, Marrin provides a thorough overview of the conditions and events that lead up to and contributed to the Triangle Waist Company fire.  He also discusses what happened afterwords and how it might have been prevented.  He goes on to highlight the fact that such sweatshops and factories are still with us today, both inside and outside the United States.  He makes it clear that the labor movement is far from over. He also looks at both sides of the issue, those who support such shops and those who do not. This can leave the impression that sweatshops do have a place in society, but I don't think that is what he was trying to say.  I believe he was just showing why people work in such factories and shops.  I did find it a bit jarring to leap from the early 1900s all the way to present day.  It would have been nice to have more information on what happened in between the two time periods.  I appreciated the numerous quotes and stories of real people who were there.  In fact the most powerful part of this book are the quotes from eyewitnesses.

One of the nice things about fiction is that it allows the writer to insert emotion and depth into the story they are telling.  Haddix does a great job of that in this book.  The story follows three young women living in New York in 1911, whose lives slowly intertwine. Jane is the daughter of a wealthy businessman and has been sheltered and pampered her whole life, but she finds going to tea parties and wearing fancy clothes does not satisfy her.  When she finds out about the garment workers strike it catches her attention. Eventually she runs away and finds out what life is really like for the garment workers.  Yetta and her sister, Rahel, are both garment workers involved in the strike.  They are immigrants from Russia trying to save enough money to help their families come to the United States.  Yetta stands firmly with the strikers even when it results in beatings and arrest.  Bella is a recent immigrant from Italy, come to the United States to earn money to save her family from starvation.  Only when she meets Yetta and Jane does she start to understand that there are some things worth fighting and sacrificing for.  All three girls are caught up in the fire.  What makes this book so powerful I think is how real each of these characters becomes.  It is easy to visualize each of the three girls very distinctly.  The setting is so real one can almost see the crowds and smell the sewage.

While not quite as emotionally  powerful as Haddix's Uprising, Friesner still creates characters and setting that are believable.  I became quite attached to Raisa, Brina, Gavrel, and the rest.  Raise comes to America to escape her Jewish Shtetl.  She plans to meet up with her sister, Henda, in New York.  But when she gets there with a young girl she has taken under her wing, she finds her sister missing.  Frantically, Raisa looks for her sister, but first she must find a place to live and a job to support herself and Brina.  She meets Gavrel, a garment worker and a rabbi in training.  She moves in with his family and finally finds work in a sweatshop.  With her dreams of an education and finding her sister, Raisa must find a way past the terrible conditions and mind-numbing, exhausting work at the Triangle Waist Company.  And then the fire occurs and the life Raisa's has dreamed about hangs in the balance.  Friesner does a fine job telling Raisa's story.

All four of these books provide a look at a time period that has heavily influenced not only the position of labor unions but the status of women.