October 07, 2011
It's interesting to watch the evolution of graphic novels and the variation in the quality of different series.  I confess there are few graphic novel series that I truly love.  There are a bunch that I like, but only a few that I truly love, such as The Secret Science Alliance (I keep hoping that Eleanor Davis will write a sequel), Zita, the Space Girl,  Smile, The Three Thieves series, and Lunch Lady (I think I love this one because it revolves around someone who works in a school).  The Amulet, Amelia Rules and Bone series have grown on me over time. 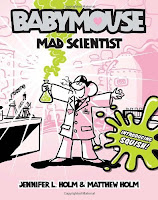 
The greatest scientific discovery of the 21st century is about to be revealed . . . when Babymouse enters the school science fair! Will her amazing discovery win 1st place? Will it become a successful spin off series?

Many of the girls at my school love this series, so I will be adding the books from the series that the library doesn't already have.  This book provides a light, fun read.  There is a slight plot involving a science fair and the introduction of Squish, the amoeba. I did enjoy Babymouse's daydreaming, it reminded me of my own daydreaming tendencies, past and present.  Overall, recommended for those who like the series.


Introducing SQUISH—a new graphic novel series about a comic book-loving, twinkie-eating grade school AMOEBA trying to find his place in the world (or at least trying to make it through a school day). Inspired by his favorite comic book hero, SUPER AMOEBA!, Squish has to navigate school (bullies! detention! Principal Planaria!), family (dad: Hates to wear a tie. Secretly listens to heavy metal in the car), and friends (Peggy-rainbows! happy all the time! and Pod . . . who's . . . well, you just have to meet him). Can Squish save the world—and his friends—from the forces of evil lurking in the hallways?

I have to give the Holm's credit.  I would never have thought of an amoeba as a book character.  Squish behaves like a kid and deals with things that kids deal with (a greater interest in comics than studying, bullying, etc.).  The book was amusing enough, and the illustrations appealing, there just wasn't a whole lot of plot or character development.  Squish's friends, Pod and Peggy, don't add a whole lot to the story except cluelessness.   Pod is obsessed with solving the problem of global warming and taking Squish's lunch money for himself.  Peggy is bright and perky and dumb.  In the end, Squish isn't the one to take care of the bullying problem, and nothing really changes.  However, for kids who want a light, fun, short read, this ought to work well.  The things that bother me will most likely not even be noticed by most child readers.